In our April 2017 blog post, we mention that we have a lot of recent history helping local utilities using conduit energy recovery systems. Although the conversion of water power to electricity is common, what is new in these recent applications is the need to retrofit existing system components with new systems that allow the water to act as means in generating electricity.
In 2011, tropical storm Irene collapsed the Granville spillway and dam which caused $3 Million worth of damage. Replacing the pipeline and installing a Hydroturbine system was another $3 Million. The newspapers reported that the water rates for Westfield, MA were predicted to rise 50-70% in the following five years as all estimated costs could reach $10 Million in total. Efforts to reducing operating costs for the operation of water treatment plants through conduit energy recovery became extremely important.

Sorensen Systems was called upon to be involved with the Granville Pipeline Project which was established to replace the aging existing pipeline and include the installation of a new Hydroturbine producing 37 kW which was roughly the plant’s power consumption. The components of the system included a skid mounted turbine/generator, a hydraulically operated turbine isolation valve, a hydraulic power unit, and a turbine generator control panel. The system has a remote OIT display panel located in the Hyrdroturbine room.

Sorensen Systems completed the design, installation, testing, and start-up of the hydropower turbine and generator system. To read more about conduit energy recovery and the Granville Pipeline Project, visit our webpage. If you have any questions or inquiries, please contact me at 508-351-1844 or by email. (kmcknerney@thehopegroup.com) 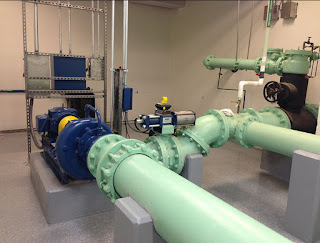 Posted by Sorensen Systems at 4:52 PM